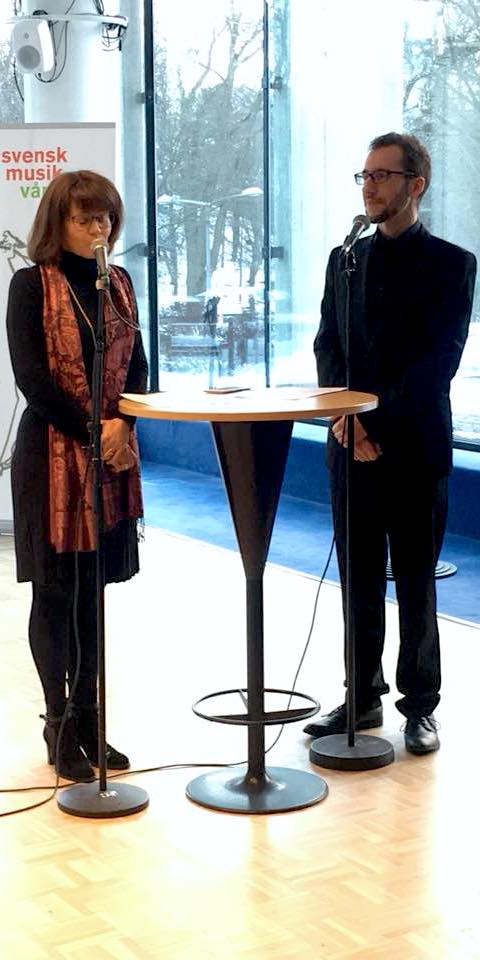 The last few months have been positively riddled with music, from presenting several concerts featuring music by Victoria Borisova-Ollas to recently having several pieces premiered in different parts of Sweden within just a few days of each other. Härnösand’s concert-goers were first treated (or perhaps subjected?) to my electroacoustic suite Mind Songs, based on text by Swedish poet and author Elsa Grave, a late-night performance that encouraged the audience to succumb to the meditative nature of the work: They were given the choice to either listen sitting in the audience, or taking to the stage and lying down on comfortable yoga mats, allowing the music to simply surround them.

Elsa Grave’s text is not a poem per se, but rather written for wedding ceremonies. It was simple but very elegant and moving, and also rather progressive as it stresses the independence and freedom of each individual in the marriage, discouraging the couple from losing their own identities within the marriage itself. An excerpt (my translation):

No one owns the life of another
But love can own both of your
Lives and evolve, transform
And be enriched in your company
That you may also love
Each other in mutual respect for your
Independence and freedom.

Working on this three-movement suite was quite interesting as I had never before worked on an electro-acoustic piece of this size and complexity. It was quite rewarding as well to work with slow, gradual, almost imperceptible changes in timbre and rhythmic structures. I recorded two different bells that I’d inherited from my grandmother and also an old metal computer keyboard with heavy keys that really click and clank when you press them. A far cry from the muted thump of modern chiclet keypads. During the performance I also read aloud from Elsa Grave’s text and played both the bells – including a third, small bell – and the keyboard.

I don’t think I’ve ever imagined that one day I’d have miced up a computer keyboard to use as a percussion instrument. Earlier that same evening opera singer Monica Danielson and percussionist Mika Takehara each did amazing performances. I was personally especially enthralled by Mika Takehara, though that’s hardly a surprise as I’m a sucker for percussion in general.

This last Tuesday, the violin duo Weber Duo premiered Trinidad for two violins, which I’d written specifically for the two wonderful violinists in the group, Ronnie and Ellinor. It’s a rather theatrical piece that calls for them to not only play but also to act in the middle part.

And last weekend, Sunday the 25th, the choral piece Romanesque Arches (originally in Swedish, Romanska bågar) was unbeknownst to me premiered by Västerås Chamber Choir! I only came to know about it because a good friend of mine performed with another choir at the same concert. If only I’d known about it and had been able to go. The text is a poem by Nobel Prize winning author and poet Tomas Tranströmer, the English version translated by Robin Fulton Macpherson. (Incidentally, if you wanted to perform it yourself, you can purchase sheet music from Gehrmans musikförlag – both the Swedish and the English version.)

Not to say that I haven’t been traveling a lot. Besides the aforementioned concerts with Borisova-Ollas, the Swedish Radio Symphony Orchestra and Chorus performed, among other things, Mozart’s Great Mass in C minor. The entire concert was broadcast live on Berwaldhallen’s website and is still available to watch. As usual, my role was to sit with the score and yell out to the camera crew what was going to happen in the music. Plenty of hours of preparation go into each concert, studying the music and filling the scores with sticky notes. Afterwards you end up with piles of used up sticky notes like this one: 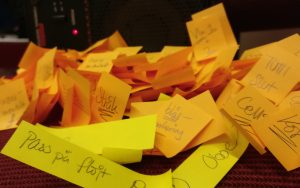 This Easter weekend I look forward to some well-deserved rest as well as both getting a couple dozen more moons in Super Mario Odyssey and perhaps even finally beating The Legend of Zelda: Breath of the Wild. Even more exciting things lie in store for April and May, but first, it’s time to relax and unwind. I wish you all a wonderful holiday!